Is your mind set on being poor or wealthy? 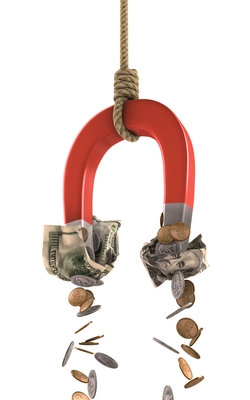 Imagine being a money magnet.

Limiting beliefs are those that keep us from realizing our goals.  Most of our limiting beliefs come from somewhere in our past. They come from what we were taught as children by our environment – parents, peers, others, from religious influences, religion, television and movies, and from popular culture.

You might think it seem odd that something as intangible as a belief could prevent you from being successful.  How can that be, you might ask? Think about it for a moment: If you believe that you can’t become wealthy, you might unknowingly pass up on potential money-making opportunities that present themselves, simply because your brain doesn’t recognize them or because your mind doesn’t see abundance as being something for you.  You might even do things that, instead of bringing in money, have the opposite effect and cause you to become poorer.  Success and abundance are like thermostat settings within the mind.  There are those of us who have our minds set on succeeding financially while others of us do not.  Remember the times you had an idea for a great new product but you didn’t do anything about it because you didn’t believe it could be successful.  In effect, you sabotaged yourself; only to see your idea on a television advertisement a few months later, making millions for somebody else. The difference between you and that successful person was their money mindset.

Think about the following common beliefs that many people accept take as inviolable truths:

Rich People Are Greedy and Selfish

During the recent economic turn down, rich people, never all that popular, have taken a big popularity hit. While there are certainly some rich people who are greedy and selfish, there are many more rich folks who do good things with their money.  Take Bill Gates, for example, the world’s second wealthiest man. He has already given over $28 billion dollars to charitable causes and he and his wife, Melinda Gates plan on giving 95 percent of their wealth to charity.  There are many more wealthy people who give to charity or participate in other forms of assistance for the less fortunate quietly and without fan-fare. Great wealth and greed are not synonymous and the belief that they are could very well be keeping you from becoming wealthy yourself.

“Money is the root of all evil” is a commonly misrepresented phrase taken from the Bible; one that has permeated our culture.  The actual statement, correctly translated tells us “The love of money is the root of all evil.”  Certainly, money can be used for evil purposes, but to believe that it in and of is itself evil is incorrect. Holding onto such a belief is a great way to repel money from your life.

Money Is a Limited Resource

How many times have you heard the saying “Money doesn’t grow on trees?”  This is just another way of saying that money is a limited commodity and is hard to come by.  Remember! Even in a bad economy, there are always people making money.

Becoming Wealthy Is an Impossible Dream

The most insidious and damaging of limiting beliefs about wealth is that wealth is impossible to achieve; a state that only the luckiest among us may attain. The fact is that new millionaires are created every day. These people are no different from you and me. They aren’t any smarter and they aren’t any luckier. The only difference is that these people have the drive and years of focus and work to achieve success.

These are only a small example of the hundreds of limiting beliefs regarding wealth that you may hold, even without knowing that you hold them.  What limiting beliefs do you have that you would be better off without?  One way to eliminate limiting beliefs in general is through hypnotherapy.  Limiting beliefs are deeply ingrained in our minds, in the subconscious. Using hypnosis, I can help you to remove these beliefs, replacing them with more effective and beneficial ones accurate statements that will help you to see new opportunities for gaining and manifesting wealth.