Kate “the Great” Schmidt: Self Hypnosis Helped Me Win a Bronze Medal 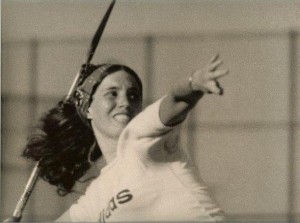 It was 1976, four years after my surprise bronze medal win in the javelin at the ‘72 Summer Olympics in Munich. My new team’s coach was looking at ways to expand beyond the physical limitations of our training. It was the ‘70s, and alternative training practices were beginning to be filed under the new catchphrase, “mind-body relationship.”

Our coach asked for volunteers to learn self hypnosis, with the goal of incorporating it into our training regimen. Never one to pass up an opportunity to find a legal advantage over my competitors, I signed up immediately.

Over the next month or two, the volunteers made weekly visits to hypnotist Susan Newton. She would guide us through this somewhat controversial training technique. In my mind, I had associated hypnosis with snake-oil salesmen. Newton, however, was nothing of the sort. She seemed perfectly sane and reasonable.

We began by selecting two keywords. One, Newton explained, should evoke an emotional response; the other, a physical feeling. I was sure of my keywords: powerful and effortless. For six years, I had been working toward achieving them in my throwing — could I do so using my mind? I was openly skeptical, but the idea secretly excited me.

Before our training sessions, the coach instructed the volunteers to take 20 to 30 minutes to practice the self-hypnosis routine we had learned. We were to find a quiet place with little likelihood of interruption.

As per Newton’s instructions, I began by taking several deep breaths to calm myself. Starting at the top of my head, I released the tension in my body. I “saw” it leaving my head, dropping down through my neck, shoulders and chest, down through my arms and exiting through my hands. Then I banished the tightness from my lower extremities, down and down, and out through my toes. 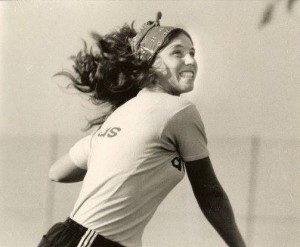 Theoretically, in this state of total relaxation, I would become receptive to suggestions I gave myself. The entire scene had to be set — visually, aurally, kinesthetically — every component of the perfect throwing scenario, starting with the smell of the freshly cut grass. There would be a gentle headwind, and my gaze would be locked onto a focal point near the horizon.

Next, I thought of the keywords I had selected, and pictured myself warming up.  With my sensory system activated, I would feel and see myself throwing effortlessly, powerfully and fast.

My training became a series of remarkable moments. I set new personal records in the weight room and on the track. I detested long-distance training, yet found myself running effortlessly for six miles. My hard work barely registered.

I was sold on hypnosis. It was the most effective training tool I had encountered on my search for improvement. I was feeling very confident about my chances in the upcoming Summer Olympics in Montreal.

Once I was in the Olympic Village, there were a gazillion distractions, but I kept at it, finding my self-hypnosis routine helpful for quieting my nerves. I began to feel some added pressure after reading that I was co-favored for the gold medal with my nemesis, Ruth Fuchs from East Germany. 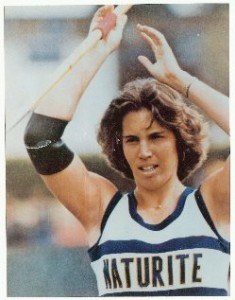 It was time for the big test. I made it through the qualifying rounds with relative ease. In the final, we would get six throws. I was up second to last, and Fuchs would go last.

In the fifth round, with one throw remaining, I glanced up at the giant scoreboard and saw I was in fifth place. You don’t get a medal for that! Had I been in a daze? I began to panic and could feel the adrenaline pulsing.

I had to find a quiet place to do my visualization routine. I walked to the middle of the vast grass field near the sidelines, sprawled out and tried to calm myself. My biggest obstacle was panic and the accompanying biochemical rush. I did the best I could to relax, but the adrenaline got the better of me.

I was unable to make my last throw effortlessly, but I did manage a powerful heave. While it was not enough to overtake Fuchs, it put me on the medal stand in third place. It wasn’t pretty, but I’ve always been grateful that I came home with some hardware!

Ever since that experience, I have periodically returned to meditation, visualization and hypnosis — most recently with Sasha Carrion, who is a very gifted practitioner of hypnotherapy. I rely on these tools, and to this day I use them when I’m stuck in a rut and need a little tune-up for success.

As a javelin thrower, Kate Schmidt was a member of three U.S. Olympic teams and won two bronze medals. The press nicknamed her “Kate the Great” when she broke the world record in 1977 with a throw of 227 feet, 5 inches — which remains as the longest-standing American track-and-field record. In 1982, Kate founded HomeBodies, a Los Angeles-based company through which she provides physician-supervised rehabilitation exercise programs.