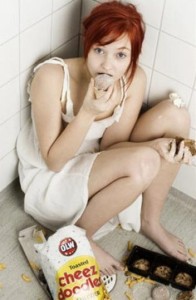 Cathy had suffered from bulimia for years. Like a wave, she went through times where she felt completely out of control, and other times where it felt more subdued.

Bulimia is a life-threatening eating disorder in which the sufferer (bulimic) partakes in binge eating and then purges her body by taking laxatives or diuretics, vomiting or compulsively exercising. The exact cause isn’t known, but factors like emotional problems (such as low self esteem, anxiety or depression) as well as societal expectations can increase the risk.

People who suffer from bulimia often lack the ability to express their emotions, and feel out of control.

More often than not, Cathy’s out-of-control times coincided with tough times in her life, such as when she experienced a break up or her narcissistic mother was being highly critical of her.

As Cathy lost control of other areas of her life, she would vent her pent-up energy by mindlessly eating large amounts of food while not even enjoying it. She would eat so much that her stomach felt as though it was going to pop. This led to frequent purging that ultimately wreaked havoc on her tooth enamel.

Cathy began using laxatives. This continued until the twisting and turning in her intestines became unbearable one night. She decided that she no longer wanted to live this way, so she contacted me.

One of my first goals was to help Cathy process all the pent-up emotion she had been carrying for so long. Because she was never good enough for her mother, Cathy was very sensitive to rejection. I focused on increasing her self esteem and helping her let go of any illusions of her mother changing, especially since her mom didn’t feel that she had a problem to begin with.

Cathy came in for hypnosis sessions for a few months, until she found herself so empowered and strong that bulimia was no longer a part of her life. From time to time, she still listens to her audios as reinforcement. And, from time to time, I check in on her to make sure all is well.

Just as it helped Cathy, hypnotherapy has proven to be a successful way to recover from bulimia. According to the Mayo Clinic, it may “increase awareness of your body’s cues for eating and fullness, as well as promote a sense of well-being and relaxation.”

While under hypnosis, a bulimic is in immediate contact with her subconscious, where, arguably, the root of the problem exists.

“To the subconscious, all events, imagined or actually experienced, are ‘real.’ This is a wonderful attribute of the mind,” writes Dr. Bryan Knight, one of Canada’s foremost hypno-psychotherapists. “It means that the bulimic can take some traumatic event that has deeply upset her and, in her imagination, re-write that event so the movie in her mind turns out the way she would prefer.”

Hypnotherapy enables the bulimic to imagine behaving differently and, by extension, visualize a new and healthy life.

As Dr. Knight writes, “Hypnotherapy helps you achieve what all psychotherapy seeks: that you attain enough independence to trust your own judgement, and retain enough interdependence that you contribute the most to society that your unique personality can offer.”