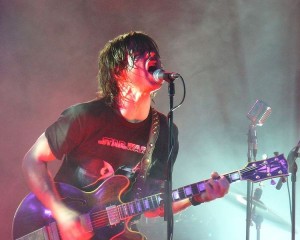 Acclaimed musician and author Ryan Adams had his first experience with writer’s block while working on his 2004 album, “Love Is Hell.” His inability to create new music was hellish for him as well.

“The feeling was gone, and I hadn’t experienced that void before in my life, even when I thought I had writer’s block,” Adams said recently in an interview for Gigwise. “I was desperate to write; the need to communicate was there.”

He said the experience “was super weird, because I was actually writing about writer’s block on that record and nobody can tune completely into that because of the way that I wrote it. That record is almost entirely about watching television and movies and writer’s block.”

Adams was also diagnosed with Ménière’s disease, a debilitating inner-ear disorder that causes vertigo. By 2011, as far as overcoming both issues, he said he “didn’t even know how to anymore.”

He decided to try hypnotherapy.

“You get really relaxed,” he explained. “It lasts an hour and I could understand what my problems were. Why was I spiteful? Why was I scared? Why was I angry about music? What was wrong? I think just being dizzy and afraid that someone was going to flash lights at me on stage made me not want to do it, because it makes me want to fall over.”

While the causes of writer’s block vary from person to person, self doubt and the fear of rejection can often be the triggers. Hypnotherapy helps creative people get past writer’s block by training their minds to write at will.

As I wrote in Overcome writer’s block with hypnosis, many artists have successfully used this therapy to get their creative juices flowing again – among them, the composer Sergei Rachmaninoff, who, like Adams, suffered debilitating writer’s block back in the 1890s. Thanks to hypnotherapy, Rachmanioff’s blockages were cleared, enabling him to create one of his most famous compositions, his Second Concerto.

A client of mine, who is a best-selling author, also felt stumped, without any clarity as to one of her character’s motivation.

She knew that hypnotherapy worked well. A year earlier, I had helped her to focus and write, regardless of all of the construction noise that was happening next door.  Soon after, she was able to finish her book.

After she expressed her feelings to me of being blocked and frustrated, she asked that I help her get in touch with her creativity. That was exactly what I did.  Toward the end of our session, those missing pieces of the puzzle came to her, so much so that when we were done and I asked her to open her eyes, she blurted, “I need to go write this all down.  I’ll explain later.”  A big hug and away she went.

Soon after, she explained how, while in a hypnotic state, she was able to see her characters come to life. She was now able to better understand her characters’ main motives.  What had once eluded her was now crystal clear.

These three success stories are not at all uncommon – in fact, when American Health Magazines compared psychoanalysis, behavioral therapy, and hypnosis, it was discovered that 93 percent of people recovered after only six hypnosis sessions. On the other hand, the recovery rate was 72 percent for people after 22 behavioral therapy sessions, and only 38 percent after 600 psychoanalysis sessions.

As for Adams, he was extremely relieved that hypnotherapy helped his long-lost muse return to him once again.

“I started seeing a much larger, more energetic place to go,” he said. “I knew who I was again.”